Take A Look At Final Fantasy XIV: Endwalker In Action 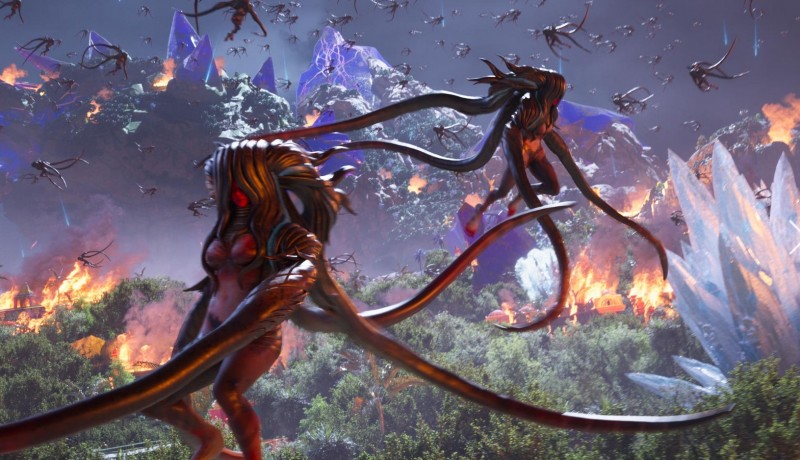 This year's Final Fantasy XIV Fan Festival may not have been the joyous gathering of fans that it has been in years past, but the move from an in-person event to a digital livestream still delivered plenty of surprises and excitement. The focus was intently on the forthcoming Endwalker expansion pack, which was announced to have a November 23 release date.

One of the biggest reveals was a new job called Reaper. Wielding a giant scythe that channels dark magics each time its swung, this role appears to be primarily close-range DPS, although you can see a ghostly transformation in the video below that appears to have some kind of a ranged magical attack. This job can only be accessed if the player has another at level 70, and is only available to people who purchased the Endwalker expansion.

As the Endwalker story unfolds, players will travel to unexplored areas, including Sharlayan, a new HUB city. This location hasn't been touched by war, showing prosperity in its soaring architecture and beautiful courtyards. Players will also travel to Mare Lamentorum, an otherworldly location with a moon-like feel.

Endwalker is brimming with most of the feature sets and additions you'd expect from an expansion of this ilk. The level cap is increasing from 80 to 90, which will be put to good use in new dungeons and raids, and there are plenty of new bosses to face, including Anima and the Magus Sisters.

Ever since its rebirth, Final Fantasy XIV has long been one of the most played and celebrated MMOs out there. Game Informer's Dan Tack gave the Shadowbringers expansion a review score of 9 out of 10, praising its new questline and worlds. We don't have long to wait to see how Endwalker adds to this sprawling experience. The cinematic at the top of this article gives you a great idea of what to expect from the story and new content.