Story of Seasons: Pioneers of Olive Town features a lot of RPG and social simulation elements. So naturally enough, one of the first questions new players have is about which characters they can begin a romantic relationship with.

There are a total of ten eligible bachelors and bachelorettes in Olive Town, with more on the way in several pieces of DLC announced for release over the next few months.

If you’re looking to weigh up all your romantic options in the game — as well as find out how to improve your relationships and propose marriage to your eventual paramour — read on below:

Which characters are romanceable in Story of Seasons: Pioneers of Olive Town?

There are 37 named NPCs in Pioneers of Olive Town; of these, there are ten with whom you can start a romantic relationship. Also, for the first time in the series, you can pursue a same-sex relationship on the same terms as a different-sex one. You and your chosen sweetheart can eventually marry, move in together, and start a family.

At least six more eligible bachelor(ette)s are due to be added to the game in future DLCs. But for now, we’re focusing on the base game.

Bachelors in Story of Seasons: Pioneers of Olive Town

There are five male love interests for your character in the Pioneers of Olive Town base game:

Damon is an extremely family-friendly bad boy. Unlike everyone else in town, he doesn’t seem to have a job; he talks about coffee enough to make you suspect he has a bit of an addiction; and he says mildly cynical things like “Good luck running a farm!”

Due to his ambiguous employment status, Damon can usually be found wandering the streets of Olive Town during the day. In the evenings he goes home to Hoof House Animal Shop, where he lives with his mother Patricia, father Georg, and sister Bridget.

Emilio is a light-hearted, laid-back type of guy. While in theory he works with his father as a fisherman, in practice he often seems to find something else he’d rather be doing.

Despite his casual attitude to his work, Emilio will still usually be found close to the beach. In the evenings he goes home to Marcos’ House, the fisherman’s hut where he lives with his parents, Marcos and Manuela. 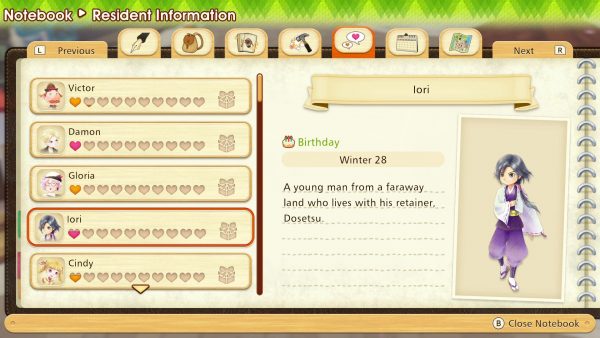 Iori is a sensitive soul whose twin passions are fishing and poetry. Like your character, he’s a newcomer to Olive Town, with the strong implication being that he’s a young nobleman who’s run away from a distant homeland.

He can usually be found fishing from the pier during the day, though you’ll sometimes encounter him taking a walk through town. At night he returns to Iori’s House on the edge of town, where he lives with his faithful retainer Dosetsu. 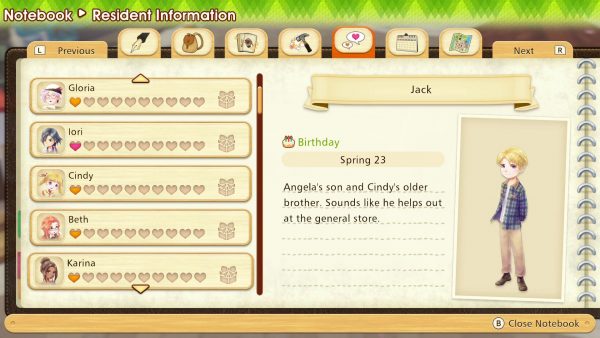 Jack has a lot in common with his friend Emilio, though he’s more absentminded and easily distracted than an outright slacker. He’s also a little more serious than his friend, still seeming to prefer fun over work but able to focus when called upon.

He lives and works at Olive General Store alongside his mother Angela, sister Cindy, and grandparents Simon and Jessie. He only seems to work part-time, though, and can often be found ambling around Olive Town’s streets during the day. 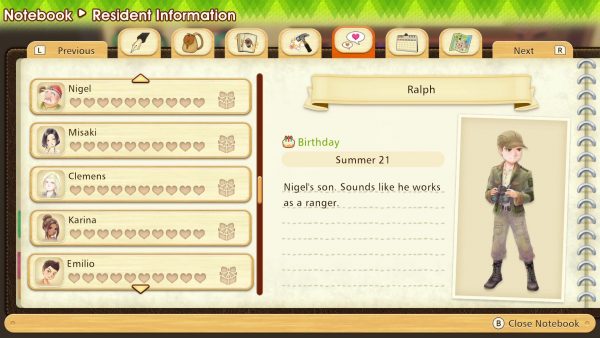 Ralph‘s job as a forest ranger means that he’s often set apart from the other residents of Olive Town, despite being a local born and bred. He’s also one of the older bachelors, judging from his character design.

Thanks to his job, he can usually be found in the forests at the edge of town. Despite being handyman Nigel’s son he has his own living arrangement set up at the Ranger Station, though he doesn’t seem to return there most nights until quite late.

Bachelorettes in Story of Seasons: Pioneers of Olive Town

There are five female love interests for your character in the Pioneers of Olive Town base game: 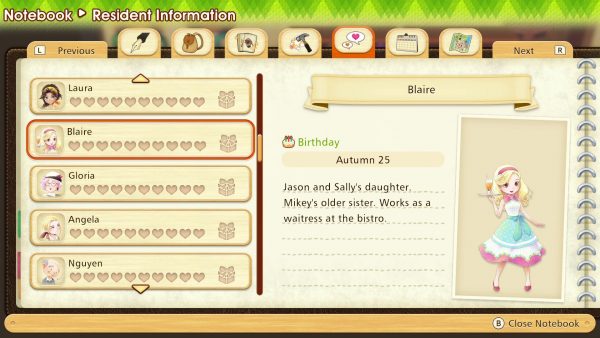 Blaire is a fairly traditional lady with a very cutesy aesthetic. She looks so much like a human confectionary, it’s unsurprising to learn that she’s a sweet person, whose main interests seem to be food and family.

She works as a waitress at the Capeside Bistro, which is open every day. This doesn’t leave her with much free time, but in the evenings she can be found at the Gull’s Rest Hotel & Café, owned by her parents Jason and Sally, where she and her brother Mikey also live. 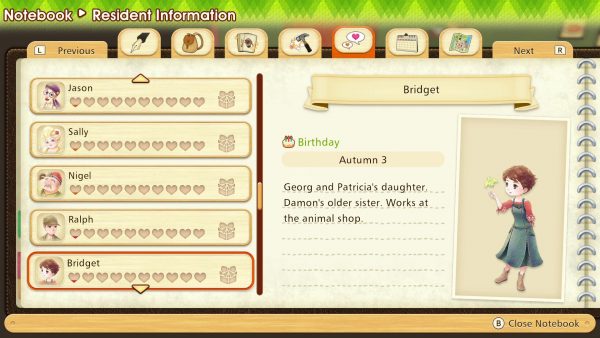 Bridget works at her mother’s animal care store at the pet counter. She’s softly spoken and appears to prefer animals over people, often viewing developments in Olive Town through the lens of how she thinks the animals feel about them.

She can usually be found in the Hoof House Animal Shop: as well as being her place of work, it’s the home she shares with her parents Patricia and Georg and brother Damon. On Tuesdays the shop is closed, and she’ll often walk to the forest at the edge of town. 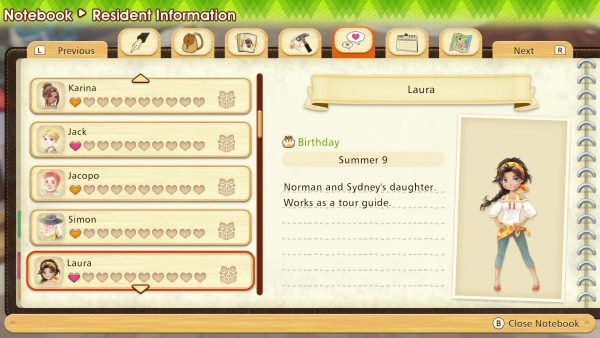 Laura is friendly and engaging, befitting her work as the local tour guide. She’s excited to meet new people and see Olive Town become a bustling tourist destination, though she expresses some concerns about the impact of tourism on the environment.

She works every day at the Tourist Information Centre, an outdoor kiosk down by the pier. In the evening she returns home to Norman’s Groceries, where she lives with her father Norman; her mother Sydney works in the city and visits on weekends. 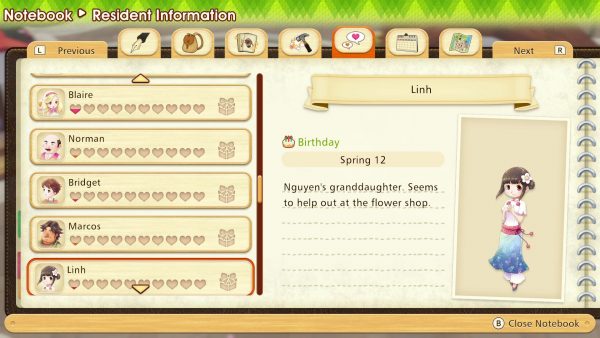 Linh is gentle and somewhat on the quiet side, and she displays a deep affinity with nature. She can often be observed teaching the local children about plant care when she’s not working.

She and her grandfather Nguyen both live and work at their place of business, Nguyen’s Flowers. Their day off is on Monday, which is the only day you’ll see her stray far from the flower shop during the daytime. 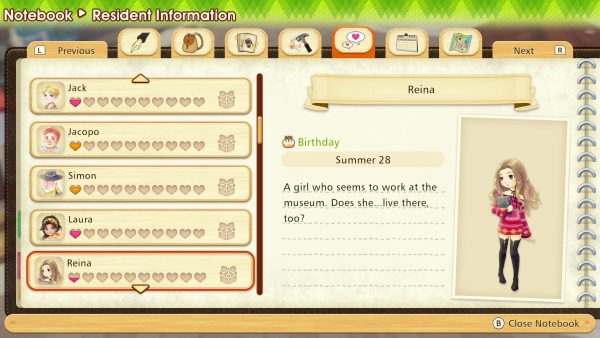 Reina is your classic manic pixie dream girl. She works at the museum as the resident relic appraiser, but she’s no stuffy academic. In fact, she’s moved into the museum’s back room so that she can party all night without being late for work in the morning.

Since Reina both lives and works at Olive Museum, that’s where she’s almost always to be found. The exceptions are Thursdays (her day off), when she’ll often be seen taking a walk around town.

How to increase relationships in Story of Seasons: Pioneers of Olive Town

When you talk to a character for the first time in Pioneers of Olive Town, you’ll get an entry for them in the Resident Information section of your Notebook. 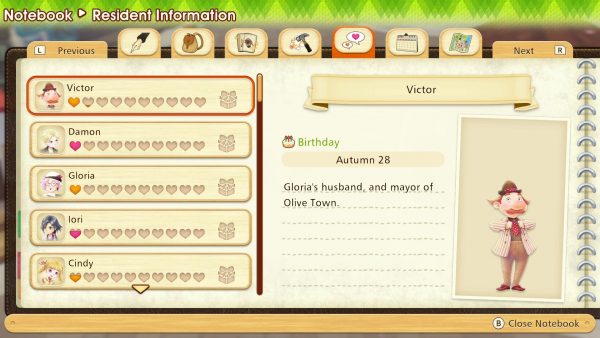 You’ll notice that each resident has ten hearts next to their name. These hearts will be empty at first, but as your relationship increases, they’ll slowly begin to fill in. Orange hearts indicate a platonic relationship, while pink hearts let you know that a character is potentially romanceable.

Talking to a resident once per day increases your relationship with them. You can talk to them more often, but it won’t increase your relationship score further. All relationship increases (whether with people or animals) are denoted by a little jingle playing, and musical notes appearing over the other character’s head. 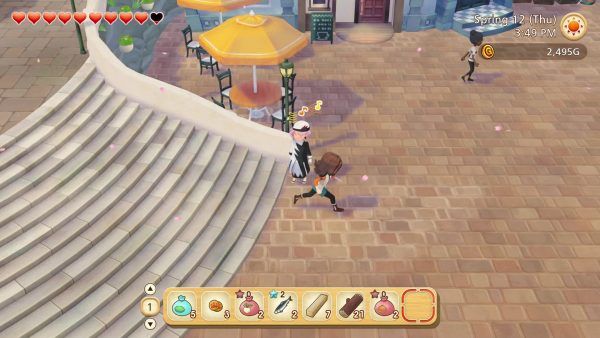 There are a couple of other ways to increase relationship score above the one-point-per-day talking limit. Go to Olive Hall and check the community noticeboard for requests. Fulfilling a request for a resident will net you a reward, as well as a relationship increase with them. You can also give them gifts.

Every time you completely fill up a heart, you unlock a special encounter, a cutscene with the character you’ve grown closer to. This scene won’t play immediately, but will trigger the next time you encounter the character in the right location. This is usually their place of work, but can sometimes occur at another outdoor location around town. 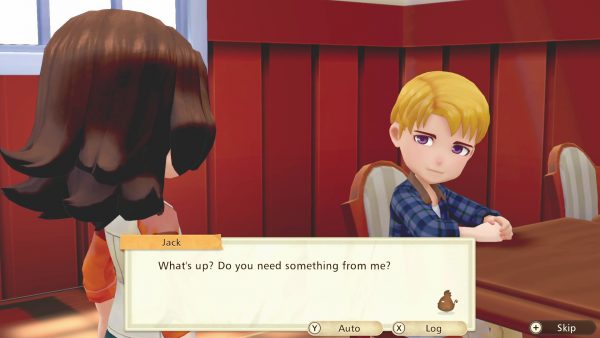 Viewing these cutscenes and occasionally making dialogue choices within them gives you an insight into a character’s backstory; their emotions, personality, and hopes for the future; and their feelings about you.

How to get married in Story of Seasons: Pioneers of Olive Town

Romantic and platonic relationships play out similarly until you reach six hearts and have had five special encounters. At this point, you’ll have the option to confess your feelings by giving them a Confession Pendant (which can be purchased from Olive General Store for 10,000G). 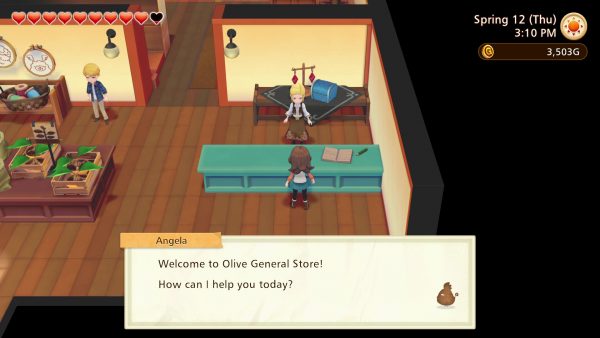 To get married, you need to get your relationship all the way up to ten hearts and have seen nine of your chosen beau’s special encounters. You also have to have completed at least one house upgrade before you can consider cohabitation. You can then propose with a blue feather purchased from Olive General Store for 20,000G.

If you meet all the requirements, your proposal will be accepted. Your wedding will take place in an all-day special event a few days after your proposal (you get a choice of three dates, so you can plan around the temporary cessation of farm work accordingly). After the wedding, your new spouse will move in to your farmhouse with you.

If you’ve made so many friends you’ve got more Town Medals than you know what to do with, have a look at our guide on what they’re used for.

More interested in the farming side of things? Check out our guide on unlocking all the tools in the game.