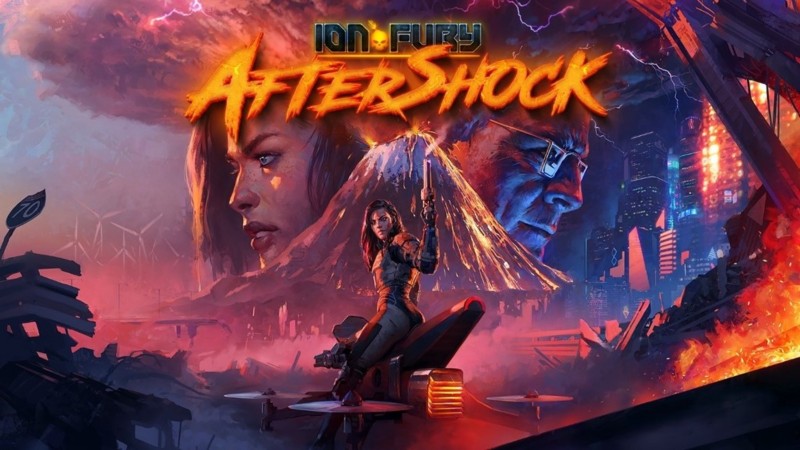 Fans of Ion Fury’s retro-inspired shooter gameplay can look forward to a new expansion called Aftershock hitting the game this summer. The expansion was briefly teased last year and looks to give fans even more of the nostalgic gameplay they love while turning up the volume even higher on an already loud adventure.

Aftershock sees heroine Shelly “Bombshell” Harrison return in full force. Unfortunately for Shelly, her nemesis Heskel is back too. Aftershock introduces brand-new zones for Shelly to blow up in pursuit of her foe as well as a suite of dangerous new enemies. Thankfully, Shelly has her Loverboy revolver as well as an arsenal of new weaponry. When she’s not mowing down everything in sight on foot, she’ll speed things up with new vehicle combat sections.

The expansion also adds an Arrange mode. This allows players to mix up the original campaign by additional elements such as new enemies, weapons, and more. That means anyone looking to replay Ion Fury can now do so under fresh conditions instead of merely replaying the existing narrative. If you’re itching to dive back into the game, Ion Fury: Aftershock will be available for $24.99 on PlayStation 4, Xbox One, Switch, and PC.

Ion Fury launched in August 2019 for PC and came to consoles last August. The game acts as a throwback to the 90s era of first-person shooters. It’s such a throwback that the game was made using the same Build Engine that spawned Duke Nukem and the original Shadow Warrior games.

Game Informer scored the game a 9 out of 10 with former editor Javy Gwaltney saying in his review “Ion Fury is everything that I’ve wanted from a modernized take on the arcadey shooters of the 90s. The pitch-perfect movement, the enemy variety, creative weaponry, and fantastic level design all add up to a superb shooter campaign. In a sea of retro shooters looking to channel the glory of the genre’s early days, Ion Fury emerges as the title that pushes those thrills into the present in an engaging way, deftly capturing their timelessness.”

In spite of its praise, Ion Fury generated controversy after transphobic statements by some members of the game's development team, Voidpoint, surfaced online. It was also discovered that Ion Fury featured in-game homophobic jokes. (Voidpoint has since apologized and removed the offending content from the game).

What did you think of Ion Fury and are you excited to play Aftershock? Let us know in the comments!